On February 29, 2019, the second premiere took place. The soprano part was performed by Alina Druhak, the rest of the participants remained the same. The performance was conducted by Ihor Chernetskyi.

Congratulations on the premiere!
Opera Odessa 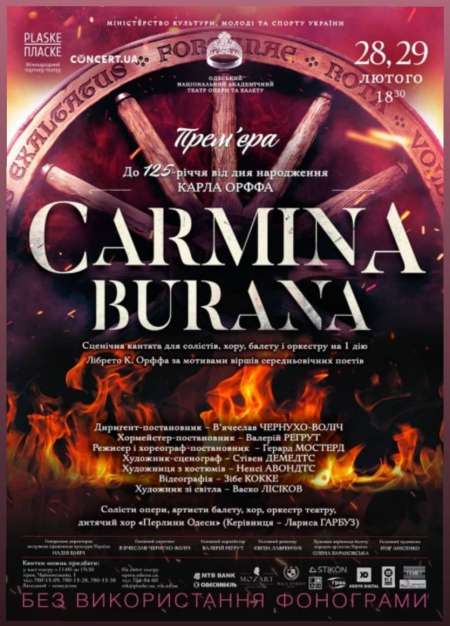 Undoubtedly, “Carmina Burana” will be one of the best performances of the theater repertoire.

Gerard Mosterd took on the production and choreography, and already from the fragment of the rehearsal it became clear: finally, on the stage in Odessa, Orff's music will be adequately reflected in modern, rather complex and expressive choreography.

The second production, dedicated to the composer's 125th anniversary, is not an updated, but a completely new version. And admittedly, this one is more successful than the previous one. Not least, of course, because the director (choreographer and director) Gerard Mosterd did not try to invent some kind of story of his own, but followed the author's plan, the music, creating a hymn to the ever-changing Lot. Modern choreography, incredible plasticity continues to fascinate the viewer. The director managed to turn the performance of the soloists and the corps de ballet into practical gems.

Viknaodessa
Manage cookie consent
To provide the best experiences, we use technologies such as cookies to store and/or access information about your device. By agreeing to these technologies, we may process data such as browsing habits or unique identifiers on this site. Failure to consent or withdraw your consent may adversely affect certain features and capabilities.
Manage options Manage services Manage vendors Read more about these purposes
View preferences
{title} {title} {title}